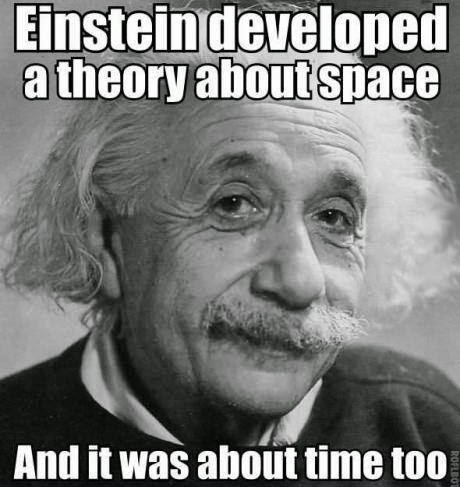 3.14 is π Day.   It is also Albert Einstein's birthday.  Help celebrate the genius in all of us with these engineering jokes.  For the 'unofficial' website, visit http://www.piday.org

If you think  π  is irrational, then continue.

Here is a list of some of the more insidious computer virus from recent years:

An Engineer in Hell

An engineer dies and reports to the pearly gates. St. Peter checks his dossier and says, "Ah, you're an engineer -- you're in the wrong place."

So the engineer reports to the gates of hell and is let in. Pretty soon, the engineer gets dissatisfied with the level of comfort in hell, and starts designing and building improvements. After a while, they've got air conditioning and flush toilets and escalators, and the engineer is a pretty popular guy.

One day God calls Satan up on the telephone and says with a sneer, "So, how's it going down there in hell?"

Satan replies, "Hey, things are going great. We've got air conditioning and flush toilets and escalators, and there's no telling what this engineer is going to come up with next."

God replies, "What??? You've got an engineer? That's a mistake -- he should never have gotten down there; send him up here."

Satan says, "No way. I like having an engineer on the staff, and I'm keeping him."

God says, "Send him back up here or I'll sue.

Satan laughs uproariously and answers, "Yeah, right. And just where are YOU going to get a lawyer?"